Cati Mayer, a volunteer for Maraudes Parisiennes, an association that helps people in difficulty in the form of night marauding in the French capital. This is an amazing  testimony on how important soap is for families in need.

The Maraudes Parisiennes has distributed 700 of our soaps this summer in Paris and this is what she wrote to report.

“We distributed two entire boxes on the first day at three different camps around Porte d’Aubervilliers and under a bridge near Porte de la Villette. Everybody was very happy about the soap bars. We gave families with children multiple bars and told them not to worry about using them up as we had many more in store for them if needed. The refugees were also happy about using them for their showers instead of the small hotel shower gels we usually distribute since the soap bars last longer. We handed out the soap in little sandwich plastic bags, so they could carry them around, even after they were wet. After the first big distribution of soap bars, we always took a bag of 30 – 50 bars on our distributions and let the refugees know that we had more soaps if needed. The summer distributions were very hectic. The refugees literally ran to us when they heard about the soaps, as rare distribution items usually run out fast and the desperate men and women really want to make sure to get some before things run out. We were happy to ensure everyone that we actually had enough soaps for everyone. I wish you could have seen some of the people’s hands that were reaching out for the soap bars to realize how much needed the soaps actually were. The poor sanitary situation leads not only to dirty fingernails, a breeding ground for bacteria, but hands were also flagged with insect bites, infected scratches and even scabies.” 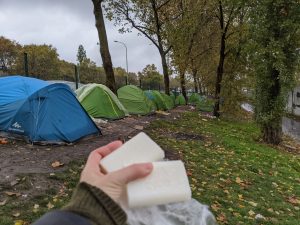 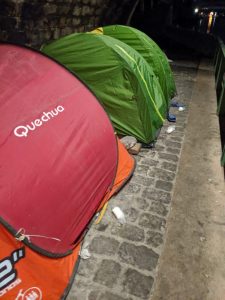 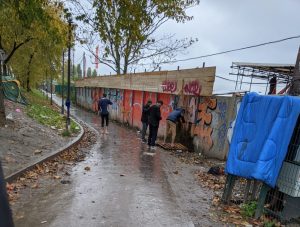