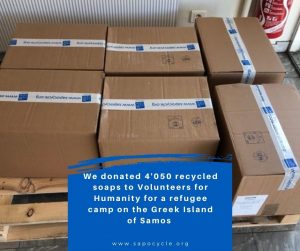 We contributed with our grain of sand : we donated 4’050 soaps to the Swiss organization Volunteers of Humanity . These soaps went to the refugee camps in the Greek Island of Samos. The Samos reception and identification center is one of the five centers set up during the 2015 migration crisis on five Greek Islands in the Aegean Sea (Lesbos, Samos, Kos, Leros and Chios) to stem the number of migrants arriving in Greece from neighboring Turkey.

The living conditions in the #Samos camp — which is smaller than that of Moria, with nearly 6,000 people despite its initial capacity for 650 asylum-seekers — are also very difficult, including inadequate hygienic conditions. And a week ago, a fire broke into the refugee camp, making living conditions even worse.
Our soaps have reached the hands of these so much needed people.

Support SapoCycle with a donation of 10 Sfr. or more and receive one of our Iconic Hüüsli soaps as Thank-you gift. Support a family